Princess Sylvia von Phoenix (シルヴィア, Shiruvia) is the first princess of the Royal Family and older sister to Lillianne and Sherwood. She is supposedly the second eldest member of the Royalties.

Sylvia bears the standard Royal Family appearance: blonde hair, red eyes with slit pupils. She wears a white dress and white gauntlets but in the past her dress has puffed sleeves while it's currently sleeveless.

Along with Sawawa, Sylvia have the biggest bust size of the entire female cast. In the third OVA Riza humorously compared the bust size of the two and failed to determine as to whose is bigger. Her chest when she was younger was visibly smaller than it is today.

When Hiro met her for the first time in chapter 44, she seemed to be a gentle and kind person. However, Sherwood mentioned that Sylvia is a natural-born swindler and is not an honest opponent. As the series progresses, Sherwood was proven to be correct; Sylvia is very skilled at (and has a knack for) manipulating others as pawns and will do anything to win the throne, no matter how dirty or underhanded it is.

Normally, she behaves much like Hime, calm and dignified. However, she is also very calculating and prideful. During her duel with Hime she proved to be cruel and slightly sadistic.

In Hime's flashbacks, it was revealed that Sylvia and Hime used to be very close to each other, though she would at times display superiority over her younger sibling. For example, when Hime composed a song on the piano for her, Sylvia called it "incomplete", as it's not worthy to express her beauty, and when Sylvia pranked her by trapping her in a room using magic.

In the future, Sylvia has killed Duken. She and Sherwood are the only siblings left in the battle and is winning. When Hime was warped into the timeline, she dueled Hime, telling her that she will definitely get over her (Hime's) death with a sadistic smile. As Sylvia prepares to deal the final blow, the future timeline's Hiro appears and blocks the strike. Hiro flings Sylvia aside, knocking her out and jumps out of the window with Hime.

Later in the story, it is revealed that her brother Emile was secretly murdered and raised as her blood warrior.

When Sylvia reaches adulthood, she abandoned her servants and challenged the newly awakened Fuhito on her own, defeating and absorbing her brother. She then pulled Hime and Hiro into her own consciousness, where the two sisters had a deathmatch. As she prepares to use her phoenix power to eradicate her sister, Hime activated her own power as well, the two forces cancels out each other, leaving Sylvia and Hime alive, but powerless, and thus Sherwood is crowned Queen by default. Sylvia and Fuhito are later seen in a roadside cafe.

Not much interaction was shown between Duken and Sylvia, though she considered him a hindrance in her conquest for the throne and he likewise. It is later revealed by Sherwood that she had destroyed him in the future timeline.

Gilliam viewed her with caution and disdain because of her treacherous nature. She seems to be aware of this, however decides not to do anything. Sylvia and Gilliam never had any notable encounter throughout the story so it is unclear what Sylvia thinks of her brother.

Emile knew full well what kind of person Sylvia is, and therefore decided to stay out of her "businesses". Sylvia considered Emile a tough opponent (because of his telekinetic prowess), something she rarely does to anyone throughout the series. Though Emile clearly supports Lilliane and Sherwood, Sylvia does not seem to mind in any way, mostly because she knew about his impending death.

She later resurrects him as her blood servant following his murder.

Lillianne and Sylvia used to be very close to each other. However Sylvia's cruel pranks and actions later causes Lilliane to deeply despise her. Their relationship worsens following the declaration of the Throne War. Lillianne and Sylvia both understands their opponent's power, so they always engage each other with caution.

Sylvia often draw up tricks and plots to hinder/harass/harm her sister.

Lillianne's nickname "Hime" was given by Sylvia herself.

Sherwood was aware that her eldest sister was a natural-born swindler and cannot be trusted. She, like all other siblings, does not want to interfere with Sylvia's plots. Sylvia does not hesitate to kill Sherwood, because she knows Sherwood is the weakest of all Royalties.

Kiniski captured Sylvia when he was plotting to seize the throne. However his vampiric nature coupled with the temptation of drinking Royal blood inadvertently made him her blood servant. Sylvia quickly turned the table on Kiniski when he realized that he requires her blood in order to survive.

Francette is Sylvia's android. Despite being bound to her master, Francette is not commonly seen alongside Sylvia whenever she appears, and is often seen in the background. Sylvia abandoned Francette (along with Mikasa) when she reaches adulthood.

Sylvia often uses Mikasa as her "muscle", often sending her out to physically deal with monsters or on retrieval missions. She is also fond of sending Mikasa to harass Lillianne's party during critical times.

Mikasa along with Francette was abandoned when Sylvia reaches adulthood.

Sylvia seemed somewhat interested in Hiro since her first appearance. She would often act kind to him, though this might be a ruse to capture him and cause Lillianne to suffer or to leave her defenseless.

Madeleine was entrusted to Sylvia by a dying Emile. She would later set free to the mermaid even though she would sometimes call upon her to defend against her siblings's attacks. It was Sylvia the one who originally placed the curse on Madeleine.

Madeleine was not shown when Sylvia reaches adulthood, so she might have been set free by her master.

Like any other Royal phoenixes, Sylvia can resurrect the dead with her blood. She is also capable of casting curses and spells and was seen to be able to use a magical tome.

Sylvia can play the piano, as she taught her sister Lilliane to play it, though it is unknown how skillful she is with the instrument. She is also an adept swordswoman, as seen in her duels with Lillianne.

Sylvia can absorb and manipulate other beings's consciousness at will, as seen when she absorbs and subjugates Fuhito within her mind. 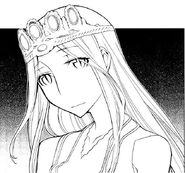 Sylvia in the manga.

Sylvia as she appears in the 3rd OVA, along with Francette and Mikasa.
Community content is available under CC-BY-SA unless otherwise noted.
Advertisement