Nakua (南久阿 Nakua), also called Naqua, was originally a spider goddess that protected Sasanaki city and all of mainland Japan.

In the past, worshipers used to offer her human sacrifices in return for divine protection, but the practice had since declined. She resides in the basement of Hiro's school and, during the night, devours students who were lured there by a ghost story (in return, she protects the school, which she claims is a fair deal). Despite the fact that Hime choses not to interfere with her activities, both Riza and Reiri decides to fight against her and drive her away from the school. Because of this, she punished Hime and her servants by sending them back to Ice Age, but was eventually outwitted.

She reappears later, inhabiting another school in the nearby town. However, an evil god invades her territory and she is too weak from her last defeat to fight back. Riza, who happened to transfer to the same school, causing Nakua to once again cross path with Hime. This time Nakua forms an alliance with Hime and they defeat the evil god together. During the process she also shows Hime how to slay an evil god (basically how to kill herself as well). This act convinces Hime that Nakua is no longer hostile. By Hime's offer, she resides in the small shrine built by Flandre and Francesca near Hime's mansion and has stopped taking human sacrifices completely, instead accepting alternative offers such as sweets made by Sawawa.

In the last chapter, after the final battle with Sylvia, Hime moves to another mansion and what happens to Nakua is not mentioned.

Nakua's original form is unknown (although most likely a giant spider), though seem to prefer the appearance of a highschool girl. She wears a school uniform different from that of Reiri and other students, despite her initial appearance in the school amongst other students. Nakua is of average height (for a highschool girl), but she becomes visibly shorter as the series progress. Her height is even shorter in Naqua-den.

She is always upset and/or indifferent about her surroundings, although she displays more emotions and seems calmer in Naqua-den.

Besides the school uniform, which is her default outfit, at her old shrine in the high school she wears a traditional Japanese garment. When she sends Hime back to the Ice Age, she wears a snowsuit. Both instances hint at her being able to manipulate her clothing and/or she changes them off-screen.

She has the ability to secrete silk, summoning large spiders, as well as turning her hair into spider legs. She also has the ability to control lesser spider demons and is shown to be able of creating more if the initial ones happens to be killed. She can also manifest/create a gigantic demonic spider to fend off attackers, though the same spider was later seen dead in the flooded streets. It made no more appearances after that point, so it might have been the only one she can summon, or just that she simply does not feel like creating one.

Her spider legs/hair is also suggested to be very strong, capable of striking and pinning a giant snake demon with ease, even though Nakua was weakened at that time.

Her ability to manipulate space-time is demonstrated when she sends Hime and her party 2000 years into the past. She is capable of creating a small space to stand in and observe the group.

Nakua can walk on vertical surfaces, as shown in Naqua-den. She can teleport between shrines in Japan at will.

Nakua as she appears in the 3rd OVA. 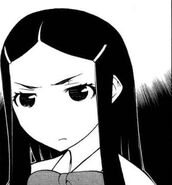 Nakua's appearance in the manga. 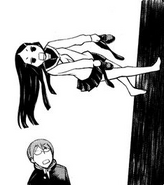 Nakua walking on a wall.
Community content is available under CC-BY-SA unless otherwise noted.
Advertisement