Hiro Hiyorimi (日和見日郎, Hiyorimi Hirō) is the main protagonist of Princess Resurrection. At the start of the series, Hiro followed the note Sawawa gave him to a mansion, only to find it deserted. While searching for his sister, he was smashed by a van that ricocheted off an android (crushed by falling l-beam in the anime) and died. He was then resurrected by a girl in gothic clothes hours later. Driven to find the girl, he finds her in battle with a wolf-creature. He instinctively jumps in front of her and gets mauled by the wolf; after the girl defeated the creature, she walks over to Hiro and introduces herself as Hime as well as explaining everything. From then on Hiro became Hime's blood servant and always does his best to protect his master.

Hiro is considered the "weakest" of all characters, he always does whatever the school gang orders. When Hiro and Reiri first meet, he also follows her instructions unquestionally (whom he barely knows) resulting in his vampire transformation. He usually fumbles and is borderline clumsy, though when Hime is in danger, he often displays sharp responses, mainly because the blood contract does its job-making him Hime's meat-shield regardless of his situation, but also because he genuinely cares about his master's safety.

He rarely ever shows anger.

Despite being "useless", as described by Hime, he is very kind and caring, such as when he saved a puppy from being run over by a truck and helped fight off the vampire mob that are attacking Reiri even though he is outnumbered.

He is also not perverted, something that made Bucchi confused (and jealous) about how he can live in a house full of women. He blushes and turns his head when Riza unknowingly shows her panties and does not look when Reiri is showing off hers.

Hiro hates fast vehicles, while enjoys walking in the morning and late evenings. Riza often drags him along whenever she goes on a bike or jetski ride, much to his dismay (and horror).

In the future he made a promise not to die again and somehow being able to defend Hime against Sylvia and Madeleine, suggesting that he has strengthened significantly over the years and overcame his dependence on Royal Blood to survive. His future face is never shown completely.

Little is known about Hiro's past, only that his parents are dead and he had to live with his sister. At the beginning of the series, Hiro followed Sawawa's note to Sasanaki to find the mansion she was working in. When he arrived, the villa seemed abandoned. Confused, he tried to search for his sister, only to get smashed by a truck and got fatally injured (In the anime, he rescues a girl in a gothic-lollita dress from a falling steel beam that hits him instead).

He wakes up in the morgue a few hours later, confused, and escapes the hospital. The hospital staff that witnessed his resuscitation dubbed him "Deadman Walking". On the road he noticed that the lights are on in the villa, and that all the dogs were howling under a full moon. Hiro arrived at the villa to discover that the girl he saw was fighting a werewolf. After defeating the werewolf's pack of dogs the werewolf charges at her. As the attack is about to connect Hiro jumps in front of her and the werewolf punches huge hole in his torso, which give the girl the chance to finish off her opponent. After she has killed the werewolf she goes to him, and revives him with the blood (in the anime, the flame of life) and revealed her name to be Hime. Hiro is then bound by blood to serve as Hime's servant and protector.

Hime is Hiro's master. She is the one who brought him back to life using her blood (flame of life in the anime), thus making him half-immortal. Their true relationship is still unclear though it is clear that they exhibit a strong master-servant bond. Though first reluctant, after learning more about her, Hiro strives to protects her, often by acting as a human shield. Hime tends to treat Hiro very coldly, to the point of making him drink drips of blood as she flicks it at him and often just forgetting to give him blood so he would turn back into a corpse.

Hiro does not have the courage to ask Hime about her past so he can piece together information about her. She does not tell him her true name and what happend to her old servants. As times goes by Hiro learns that Hime's life worth a lot more than his and no matter how many lives he gave to protect her won't suffice, thus he becomes more and more loyal towards her. When he finds out that she will become an immortal phoenix and he will not even equal a second in her life span he swears that no matter how short a time he spends with her he will stay with her to the end.

Hiro is also one of the only characters that can "read" Hime's emotions. He only does this once, though, at the beginning of the manga when he notices the look of loneliness in her eyes.

Hiro admitted that having feelings for Hime in the anime series. He tried to kiss her but she slapped him, not because she did not want the kiss (this is uncertain) but because the whole gang was there, watching them.

In the manga sequel, it is heavily implied that he has romantic feelings for her.

Hiro deeply cares about his only family member. He always tries to keep her out of trouble whenever something happens to the mansion, though he usually makes it sound awkward and not very convincing.

Hiro sees Riza as another sister, whom he also tries to keep out of harms way (which usually fails, considering Riza's volatile attitude). He is usually dragged along on her bike rides, much to his dismay. He does not seem to notice Riza's feelings for him, though he seemed to appreciate her company.

Hiro, unlike the other students of Sasanaki Highschool, does not think much of Reiri until the "zipper incident". He was later tricked and turned into a vampire by her so she can acquire Hime's blood through him. Despite this, he does not seem to remember the event or show any hatred for her. He thinks of her as a close friend and is willing to protect her, even when faced with danger.

Flandre was the (manga) cause of Hiro's death at the start of the series. Despite this, he doesn't seem to hold any grudge against her and is always willing to assist her in defending the mansion. Often times Hiro (aling with Riza) has to haul a powerless Flandre a long way back to the mansion, which annoys him somewhat.

Sherwood has a big crush on Hiro, though he always fails to notice this, which leads to Sherwood ordering Francisca to beat him up. He seems to respect her as a princess, and is equally ready to protect her as he would for Hime.

Like any other blood warrior, Hiro can regenerate from his wounds, thus further preventing him from "dying". The ability does not seem to be conditional, hence he can theoretically heal an unlimited number of times. However, there seems to be a limit as to how many times he can "die"; Riza took note of the importance of the matter during the ordeal against the evil gods. It may only appear to be a threat if he is losing a considerable amount of blood, hence the effect of the royal blood is relative to the amount of blood loss he sustains. Regeneration by itself will not trigger Hiro to take form of his awakened state, despite being in danger himself, however, once Hime is exposed to any harm, he will assume this form. Also, his status as a blood warrior does not increase his physical abilities, making him (still) one of the weakest characters in the series. Although he lacks offensive power, he is a very capable meat shield and is a quick learner. The most noteworthy of his progress as a blood warrior can be witnessed during Gilliam's attempt at killing Hime, where Hiro was able to match the prince's speed while everyone else was distracted. By the time he faced off with Trioxin-revived-Kiniski, he was able to shield Hime from the latter's every attack.

In the beginning, Sherwood stated that Hiro will become the greatest blood warrior. Her meaning became clear when Hime bestowed the flame of life upon him and turned him into a flame warrior. (However, Keziah also became a flame warrior, so it's possible that Sherwood had meant Hiro will achieve the highest level rather than becoming greater than all others*).

As a flame warrior Hiro no longer needs Hime's blood to live. He can emit holy flames just like Royal Family members. Being a flame warrior is not without its drawbacks. For example, when fighting in a watery environment his flame-based abilities will cause the water to evaporate and the excess steam will block his vision; furthermore in chapter 84 it's revealed that the form cannot activate when a flame warrior is fully submerged. Also, when injured, Hiro still needs time to regenerate and the rate of regeneration is still dependent on the severity of the injury. Even when the form is not active, flame warriors are noticeably hot to the people around them.

In the alternate future timeline, Hiro was shown to have remained a blood warrior but his combat abilities has improved to the point where he can deflect Mikasa's bio-weapons without looking. He also seemed to have gained independence from Royal blood to survive.

His greatest strength is perhaps his loyalty to Hime. There are times when all seems lost, it is Hiro's determination to save Hime helped to solve the problem. This is the sole reason how he got into Sylvia's conciousness.

*Sherwood meant the former, as revealed in chapter 84. 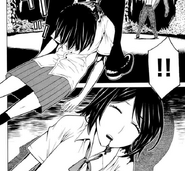 Hiro as a girl.

Ditto, now with a hook. 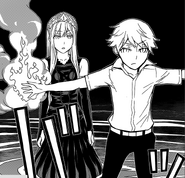 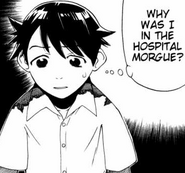 Hiro, a few minutes after awakening.

Future Hiro.
Add a photo to this gallery
Retrieved from "https://princessresurrection.fandom.com/wiki/Hiro_Hiyorimi?oldid=6642"
Community content is available under CC-BY-SA unless otherwise noted.