Flandre (フランドル Furandoru, also pronounced Furandre) is the child-like gynoid serving Lillianne. She would often be seen using a broken tree trunk to attack her enemies; she is also seen wielding a lance, chainsaws and throwing molotov cocktails. Like all androids, she's programed to protect her master at all times and will self-destruct once her master dies. She runs on electricity and needs to be recharged, causing the electricity bill for the house to pile up high.

Flandre's physical appearance always consists of a blank expression. Flandre is short, has light brown hair with a bun at the very top of her head which is actually a bolt that must be screwed all the way at all times. She is always depicted with her mouth open for some reason. Her eyes are purple and droopy.

She appears to always wear a maid's outfit: a white apron, a red ascot/tie, tights, and black Mary-Jane shoes. In the manga it is revealed that she wears bloomers.

Despite her small form, she is shown to be very strong and like all androids, very heavy. She has infrared vision in her eyes to see heat signature. Her vision has German languange HUD. She knows how to drive. She was seen driving both Hime's car and truck.

She recharges in a Borg alcove. However during times of emergency she can be recharged by connecting her using a power cord up her skirt to a power source. Her power switch is supposedly also located under her skirt (like Francette), which causes Hiro much trouble (and embarassment) finding it when he tries to start her again.

Flandre looks more human-like in the anime, while she has a rounder appearance in the manga and OVA (i.e. bigger head, more "chunky" body, etc...). Her hair style in the anime and OVA is also different from the manga version.

When she got malfunctioned in the anime special, her eyes became brighter, sharper and the circuits in them became more visible. Her usual open mouth turned into a mischievous smirk and her voice turned into a low-pitched grumble. She also sports a pair of sunglasses when she was going rogue.

She does not seem to have much of a personality (though this changes when she was malfunctioning, she gets a new rebellious attitude). She says Fuga (Huga in some versions, Hooba in English dubs) like all androids except for Ciel. Flandre is also capable of emotions, although only rarely, for example in the manga when Hime told her that she will be held responsible for Hiro's death since the car crushed him after bouncing off her, Flandre started tearing up.

She is quite childish, as seen when she literally brought any dead animal she found to Hime when the latter said she needed more blood servants. She also enjoys watching cartoons (Kerberotte Take Me to Hell!!) and even likes to mimic the characters of the show.

Flandre, like any Royal androids, are loyal and fearless, though like them she will not engage in combat if it endangers her survival. Apparently Flandre is capable of understanding sentimentalities, as she still keeps the shell Ciel gave her and is shown to be quite fond of it.

Hime is Flandre's master and she is fully loyal to her. Should Hime die, Flandre would self-destruct. She assists Hime in moving large objects, eliminating enemies and protecting her from danger. She is also Hime's personal driver.

In the manga they lacked any special interactions. In the anime when Reiri was first introduced as an antagonist, Flandre helped Hime to capture her by grabbing her clothes so she can't turn into bats. Afterwards their relationship remains mutual and both would work together to assist Hime.

Both of them often fight side by side when an enemy attacks the mansion. Riza (along with Hiro) is often ordered to haul a powerless Flandre a long way back to the mansion, something she greatly detests. Riza is also visibly annoyed when a malfunctioned Flandre effortlessly outruns her with a toy car on the Sasanaki Pass. Despite this, they both remained friendly towards each other.

Flandre was the (manga) cause of Hiro's death when a truck smashed into him after bouncing off of her. Despite this, Hiro seemed to be quite friendly towards Flandre and even assisted her a few times in defending Hime and/or the mansion.

Sawawa is Flandre's fellow maid, they do almost all of the chores around the mansion or occasional shopping together (with Flandre being the heavylifter). Sawawa seems to treat Flandre with kindness, although it is also because she treats everyone like that.

He is her maker and Flandre, like all androids, refers to him as her father (vaguely, since all she said is Fuga). Frankenstein has commented that Flandre is a type who would work hard to please anyone. She goes to him regularly for maintenance.

An android Flandre met in the street. He was breaking down so Flandre took him home for repairs. Although Ciel later turned out to be a tool made by Zeppeli to kidnap Hime, during his time as an ally Ciel told Flandre the concept of freedom and offered her a sea shell to hear the sound of the ocean. After feeling betrayed, Ciel went back to Zeppeli and self-destructed thinking about Flandre. Flandre kept the shell and would occassionally listen to it. Ciel is implied to harbor feelings for Flandre as he thinks of her moments before his destruction.

Francisca is the sister machine of Flandre. She serves Sherwood. Unlike Flandre, she is specially programmed to excel in melee combat and can easily overpower her smaller counterpart.

Flandre has super-human like strength as an gynoid. She is also extremely durable, capable of withstanding chainsaws and even a lime-dust explosion. As with all the droids, she weights quite a few tons and her weight made her vulnerable to substances such as sand and mud because once she sinks, it would be impossible to free her. She is programmed to self-destruct should her master dies, but in chapter 79 it is strongly suggested that she can't if she runs out of battery.

She was shown with infrared sensors in her eyes and she is programmed in German (shown from the German HUD in her vision).

She is also a very competent driver, as she is more often than not, tasked with driving the whole party, or Hime alone, in special situations. Her skills with a toy car (when she was malfunctioning) also greatly exceeds Riza's motorcycle skills, as she easily outruns (outpace?) Riza on the Sasanaki Pass, leaving the latter dumbfounded (and greatly annoyed).

Flandre in the OVA 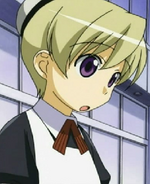 Flandre in the Anime 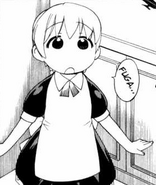 Flandre in the Manga series

Malfunctioned Flandre with her toy car. 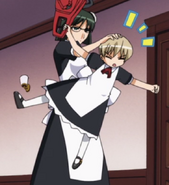 Malfunctioned Flandre held up by Francisca.
Add a photo to this gallery
Retrieved from "https://princessresurrection.fandom.com/wiki/Flandre?oldid=6436"
Community content is available under CC-BY-SA unless otherwise noted.